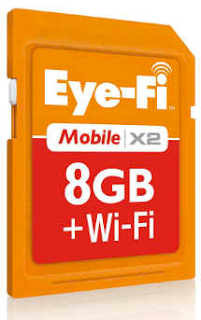 If you are old enough, you probably used to marvel that digital cameras could show a picture right after it was shot, eliminating the need for a trip to the photo store. Now, they look nearly as dated as fax machines, as smartphones allow instant sharing of photos through the magic of wireless uploads and Facebook.

But there is a way for the good old-fashioned digital camera to catch up a bit and remain relevant. A company called Eye-Fi Inc makes an SD memory card that fits most cameras. Through a nifty bit of engineering, it can send images directly to smartphones and Tablet computers as they are shot.

You get the benefits of a standalone camera - its zoom, its strong flash, its high-resolution sensor and other features that trump the smartphone - with the ability to post photos right away. It works with videos, too.

Well, you get all that under ideal circumstances. In testing the Eye-Fi card and its new Direct Mode, I encountered some problems.

It's still worth a look, though.