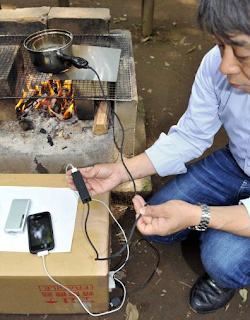 A Japanese company has come up with a new way to charge your mobile phone after a natural disaster or in the great outdoors - by heating a pot of water over a campfire.

The Hatsuden-Nabe thermo-electric cookpot turns heat from boiling water into electricity that feeds via a USB port into digital devices such as smartphones, music players and globalpositioning systems.

TES NewEnergy, based in the western city of Osaka, started selling the gadget in Japan this month for 24,150 yen, and plansto market it later in developing countries with patchy power grids.