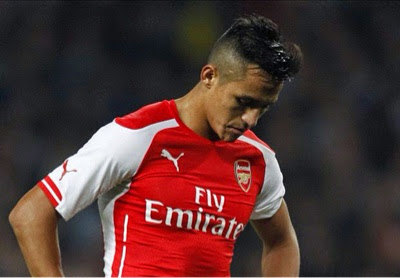 The Gunners boss believes the Chilean slows down his team's passing game by lingering on the ball and preferred Alex Oxlade-Chamberlain against Aston Villa and Tottenham.
Alexis Sanchez has been an instant hit with Arsenal supporters since becoming the second-most expensive signing in the club's history.

Yet despite the £31.8million forward's eye-catching goals, pace and industry, his early performances for the Londoners have not totally convinced Arsene Wenger.

Goal has learned that Sanchez has been dropped by the manager from the starting XI for Arsenal's last two Premier League matches for slowing down the team's well-established passing game.

Wenger reacted to Arsenal's limp 2-0 defeat at Borussia Dortmund in their Champions League opener a fortnight ago by axing Sanchez and replacing him for the trip to Aston Villa with Alex Oxlade-Chamberlain.

Arsenal triumphed 3-0 at Villa Park and Wenger repeated the formula for last Saturday's 1-1 draw against Tottenham, with Oxlade-Chamberlain smashing in the equaliser.

Eyebrows may have have been raised in the stands at the sight of Sanchez emerging from the bench as the third of Arsenal's substitutes after 62 minutes of the north London derby.

However, Wenger is concerned at the effect the World Cup star has on the team's style of play when he plays entire matches.

The Frenchman and his coaching staff are trying to drill into Sanchez the need to release the ball earlier rather than hang on to it for too long and lose the ball in dangerous areas.

One particular area they are working on is when Sanchez receives the ball around the half-way line with his back to goal and is under pressure from the opposition.

Arsenal are convinced the training-ground discussions will help make the Chilean even more of an asset to the team.

Sanchez has mainly been used on the right flank since his transfer from Barcelona, although he spearheaded the attack in two early-season matches when preferred up front to Olivier Giroud.

Since Giroud was sidelined with a broken foot and Danny Welbeck arrived on deadline day for £16 million, the former Manchester United man has started all four of Arsenal's Premier League and Champions League matches, and Sanchez has had to fight with the likes of Oxlade-Chamberlain, Santi Cazorla, Mesut Ozil and Jack Wilshere for a wide attacking role.

With four goals in five matches before the Spurs match, including a wondrous volleyed goal in last month's 2-2 draw with Manchester City, Sanchez appeared to have made an emphatic case for his inclusion.

But Wenger believes the 25-year-old needs to fine-tune his game before being one of the first names on the teamsheet.
Alexis Arsenal Wenger
Share this article :
Tweet
+
Next
« Prev Post