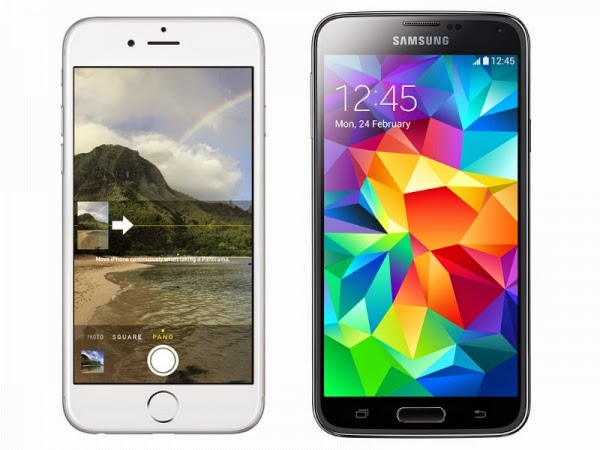 The iPhone 6 went on sale on Sept. 19 and while it is already up for pre-order many are wondering just how it stacks up against other flagship phones.

One of the most respected and coveted Android phones on the market is the Samsung Galaxy S5. Here is a comparison of the specs in the two devices.

In terms of design, the Samsung Galaxy S5 is not that huge of a leap from the Galaxy S4. Sure, the corners are a little more rounded, but it includes the faux leather backing from the Note series, which many see as a bad thing.

The iPhone 6 is also not really a huge leap forward in terms of design from the iPhone 5S; however, the iPhone has always looked very premium and the iPhone 6 is no exception. The faux leather on the back of the Galaxy S5 certainly does not give the same premium feel as the iPhone. The addition of the rounded edges on the device is a nice addition and should help the device feel a little more comfortable in the users hand.

The display on the Galaxy S5 is also larger, coming in at 5.1-inches against Apple's 4.7-inch display on the iPhone 6. This isn't necessarily a good thing though, as there are many users who would prefer having a smaller device in their pocket.

Apple is introducing its new A8 processor in the iPhone 6, and while it has not officially announced the speed of the processor, benchmark tests show that it hovers around the 1.4GHz mark.

Against the 2.5GHz Qualcomm Snapdragon 801 quad-core processor in the Samsung Galaxy S5, Apple is really lagging behind in terms of speed. Despite this, it's important to note that the A8 chip is a 64-bit processor while the Snapdragon 801 is 32-bit. Because of this, the A8 processor could potentially run faster than Qualcomm's offering, although in reality it probably won't.

Unfortunately Apple has decided not to upgrade the amount of RAM in the iPhone 6, and will continue to offer only 1GB. Against the Galaxy S5's 3GB, the iPhone 6 is no match. If a user plans on multitasking a lot and running high-power games along with other memory-hungry apps at the same time, then they should probably consider the Galaxy S5. For the average user 1GB of RAM should be plenty, however.

As far as storage goes, the iPhone 6 comes in 16GB, 64GB and 128GB versions, while the Samsung Galaxy S5 only comes with 16GB or 32GB of storage. Despite this, the Galaxy S5 has a microSD card slot, allowing users to expand storage to up to 128GB.

While the iPhone 6 Plus now has optical image stabilization, which should really help improve picture quality, the device's smaller brother, the iPhone 6, does not have this luxury. This would have been the saving grace of the 8MP camera, but alas, against the Galaxy S5's 16MP sensor, there is no competition as far as pixel resolution goes.

Megapixels are not the only thing that makes up a great camera, however. With an aperture of f/2.2 and digital stabilization, the camera on the iPhone 6 still has a lot to offer.

The front facing camera on the Galaxy S5 is 2MP, which again beats the iPhone 6 offering of 1.2MP. But 2MP with less sensor can't be comparable with 1.2MP with more lenses sensor.

The Samsung Galaxy S5 has been out for a while now, and comes in at $200 on contract. This is the same price as the iPhone 6, which is available to purchase on Sept. 19. Off contract, both devices come in at around $650.

Despite this, the design of the iPhone 6 seems a little more premium, and the fact the device includes iOS 8 may be enough to sway many users who are used to the Apple user interface and prefer to stick with that. Not only that, but many users may not have a need for the superior specs that the Galaxy S5 offers.