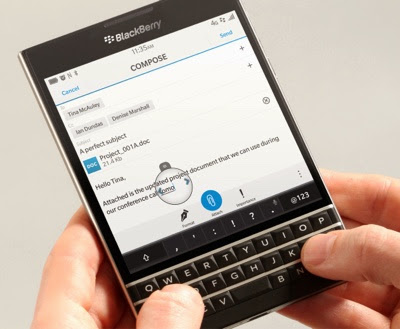 Slowly but surely, BlackBerry is getting back on its feet.

The company saw preorders for its BlackBerry Passport phone reach 200,000 since its announcement earlier this week, CEO Jon Chen said during the company’s first quarter earnings call for 2015.

BlackBerry once again posted a loss for the last quarter, but it was good news since it was a much smaller loss than analysts expected, and it was also far below the company’s earnings loss from a year ago. The company saw a loss of $207 million during the quarter, compared to a $950 million loss a year ago. Analysts expected it to lose around 16 cents per share, but it ended up losing 2 cents per share (when excluding one-time losses).

The square Passport smartphone is an attempt by BlackBerry to both offer something new and get back to its roots as the ideal phone maker for businesses. The Passport has a physical keyboard, and unlike most phones today, it features a square screen, which could be ideal for working on spreadsheets and other business documents.

Chen said the Passport sold out in 6 hours after its announcement on BlackBerry’s website and in 10 hours on Amazon. Orders from those two locations likely made up the bulk of its 200,000 preorders.

That doesn’t hold a candle to the pre-order frenzy for Apple’s new iPhones, but it’s a respectable figure for a company that most people had written off as dead a year ago.