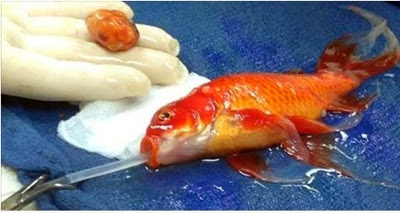 SYDNEY: A goldfish called George was on the mend in Australia Tuesday after undergoing "high risk" brain surgery in an operation the vet described as "fiddly".The 10-year-old fish had a tumour protruding from its head, leaving his owner with two options: to have it operated on or have the fish put to sleep.The Melbourne-based owner opted for the delicate surgery."She was dedicated enough to give it a go," the vet who performed the operation, Tristan Rich, told commercial radio station 3AW.George was knocked out with anaesthetic for the 30 minute procedure and is now recovering well back in his home pond, Rich said.He said the whole operation was done using three buckets of water, with different levels of anaesthetic in the first two to knock the fish out and keep him under during the procedure."It was quite fiddly as you can imagine and you have to control any blood loss. You can only lose half a millilitre," said Rich from the Lort Smith Animal Hospital."Obviously it was high risk but everything went well in the end."Rich said he knew of goldfish that had lived till they were 30 and he had performed similar operations before."The owner was quite attached to him," he said."Everyone forms bonds to pets in different ways and it is not up to us to distinguish between species."Rich added that the operation cost "a few hundred dollars". A new goldfish from a pet shop would cost less than Aus$10 (US$9).
Share this article :
Tweet
+
Next
« Prev Post