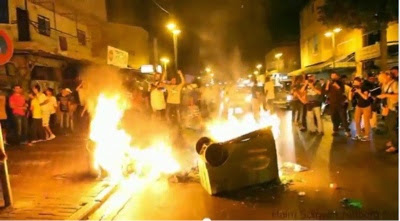 Israeli protests against African immigrants who have been seeking asylum in the Jewish State, have gained a lot of numbers lately. Riots rising to 1000-strong in Tel Aviv failed to convince many that they were “protests” as right-wing Israelis described them.
Israeli residents of the Hatikva neighborhood swarmed the streets, waving Israeli flags and screaming “Deport the Sudanese”.
Others could be heard yelling, “Infiltrators get out of our homes”.
There were 17 arrests made, with police charging Israeli rioters with assault and vandalism.
Passing African migrant workers and refugees from the Sudan were already being beaten in the streets when police arrived on the scene.
Store windows were broken out on many stores, and trash cans lit on fire. Some African migrant workers driving by were attacked, having their car windows smashed, as the angry crowd tried to pull them from their vehicles. The Israeli newspaper Haaretz says that other rioters searched taxis for Africans, but finding none, allowed the cabs to pass on.
Just before these riots, an Israeli man had been charged with arson after throwing seven Molotov cocktails at the houses of African refugees.
Likud Knesset member Miri Regev even participated in these riots, hatefully claiming that “the Sudanese were a cancer in our body”. Rioters describing themselves as “protesters” were even seen carrying banners for Interior Minister Eli Yishai, who recently called for the detention and expulsion of all Africans seeking asylum in Israel.
Yishai says that Israel’s recent spike in crime is all the fault of African immigrants.
“I cannot judge a man whose daughter gets raped. I cannot judge a young woman who cannot walk home.”
The only criminals in the streets of Tel Aviv during all of this, however, were right wing rioters.
Hatikva Israel Riot Israel Tel Aviv
Share this article :
Tweet
+
Next
« Prev Post
Previous
Next Post »