iPhone 6 or iPhone 6 Plus: Which is selling better? 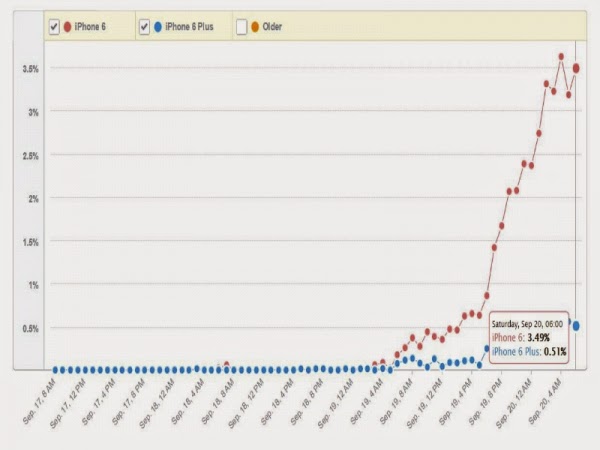 Apple has already said it has broken its own record when pre-orders for the iPhone 6 and iPhone 6 Plus shot to four million within the first 24 hours. Impressive, yes, but that's a combined number. It doesn't tell which one people are more interested in. But now that they're on sale, MixPanel was able to gather preliminary data showing the real deal.
As of Saturday, Sept. 20, 6:00 a.m. UTC, the iPhone 6 accounted for 3.49 percent of all iPhones being monitored by MixPanel while the iPhone 6 Plus represented 0.51 percent. Similar to Google Analytics for mobile sites and apps, MixPanel updates data every hour with the help of apps. By aggregating data, they are able to spot trends, such as how quickly iOS 8 is spreading, and, yes, which of the iPhone 6 or iPhone 6 Plus is being adopted more.
Still, MixPanel's data is not official or complete. It's still too early to say if the iPhone 6 is indeed more appreciated than the iPhone 6 Plus but the provided data gives consumers and investors a quick look at how the two smartphones have been performing so far. Probably at least a day or two more will provide more well-rounded data to paint a clearer picture of adoption for Apple's new offerings.
Not to mention that there may be other factors at play aside from simple consumer desire. For one, are the iPhone 6 and iPhone 6 Plus being sold in equal quantities? More iPhone 6s sold may just mean that there were just more of them to sell. When stocks of the iPhone 6 Plus ran out, for example, some people may have simply opted to get the iPhone 6 because it was still in stock.
Then again, people may have just liked the 4.7-inch form factor to begin with. The iPhone 6 Plus is indeed large at 5.5 inches and that may have been too much for some consumers.
It may have also been a matter of cost. Maybe some people didn't feel that the difference in price between the two was warranted given the difference in specs between the iPhone 6 and the iPhone 6 Plus.
There really are a lot of factors to consider, but finding out what is selling better between the two is actually trivial. As both the iPhone 6 and iPhone 6 Plus are sold out, Apple is the real winner here at the end of the day.