Powered by Blogger.
Home » Germany » NATO » Russia » Is NATO Back? That Depends on Germany

Is NATO Back? That Depends on Germany 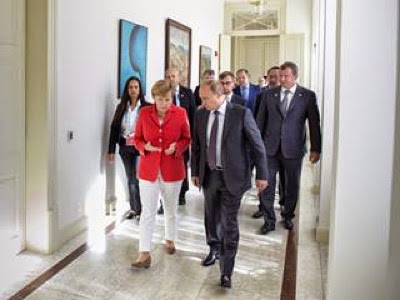 Why You Should Care

The trans-Atlantic alliance has helped keep the peace in Europe since World War II. But Russia is testing whether NATO can still be the force it once was.

With Vladimir Putin thumbing his nose at the West amid accusations of fresh Russian incursions into Ukraine, the summit next week of European and North American leaders in Wales has taken on new urgency.

They’re converging on the Welsh seaside town of Newport for a biannual summit of the North Atlantic Treaty Organization, an alliance of 28 countries dedicated to defending their collective territory — if one is attacked, then, apologies to the Three Musketeers, it’s all for one and one for all. Ukraine is not a member, but plenty of its neighbors are. That’s why Putin’s ambitions for a Novorossiya, or Russian empire, have sharply raised the meeting’s stakes.

Germany, more than the U.S., may hold the key to NATO’s effectiveness.

The last few months have made clear that NATO’s core mutual-defense mission is more intensely relevant than at any time since the collapse of the Soviet Union 23 years ago. And it’s unclear if the alliance still has the credibility to deter Russia.

But there’s one more crucial change for NATO: For the first time, Germany, more than the U.S., may hold the key to NATO’s effectiveness.

With the largest population and economy in Europe, Germany has the heft to drive the alliance’s security agenda. NATO’s European members stretch from Iceland to Romania, and the U.S. has shouldered the bulk of security responsibilities since NATO’s 1949 founding. But amid budget cuts at home and an increasingly isolationist public, the U.S. is winding down its European footprint. The only other NATO country with the military size, industrial might and economic wherewithal to fill the gap is Germany.

“The French are overstretched contributing to security missions in Mali and CAR,” observes Jorge Benitez, senior fellow for trans-Atlantic security at the Atlantic Council think tank, referring to the Central African Republic. “The Brits are overstretched.”

So how much are the Germans willing to flex?

Here’s one big indicator: Despite talk of increasing the defense budgetin the wake of Russia’s takeover of Crimea, Berlin ultimately cut its military spending for the coming year by €800 million (about $1 billion) — from €33.3 billion to €32.4 billion. The government argued it had to close the budget gap, but Benitez says it’s a bad sign that “they’re cutting the defense budget at a time when their economy is doing so much better than the other allies.”

It comes amid growing pressure from the U.S. for its European allies to increase defense spending. NATO has set a threshold for country defense budgets at 2 percent of GDP, but few achieve it. Spending on Germany’s armed forces, the Bundeswehr, has gone from 1.4 percent down to 1.3 percent of its GDP in recent years, according to World Bank data.

The U.S., meanwhile, was spending 5 percent of GDP on defense earlier this decade, but that dropped to 3.8 percent last year.

The drawdown also comes despite the clamor for more NATO security assistance from Baltic states of Estonia, Latvia and Lithuania; Poland; and other former Soviet states with a history of suffering from Russia’s territorial ambitions.

Speaking in Riga, the Latvian capital, on Aug. 18, Merkel acknowledged that Europe needs to recalibrate its security strategy given Russia’s unexpected aggression. She sought to reassure the Baltics that Germany would come to the defense of its NATO allies. She also acknowledged that preparations for such a scenario “must be stronger than we thought necessary a few years ago.”

Among other things, the Germans are now contributing to stepped-up air policing flights over the Baltics. Benitez says Merkel’s remarks in Riga also indicate Germany is likely to support plans for a new “alliance assurance force,” one of the top initiatives expected from next week’s summit. According to Defense News, the “force would be maintained at a high state of readiness” across the continent “and intended for rapid deployment before a conflict erupts.”

But Merkel did not say what Latvian leaders wanted to hear most — that she supported NATO stationing troops permanently on its turf.

NATO’s governing body has denied that request. And Germany leads the resistance. “Merkel and Foreign Minister Frank-Walter Steinmeier have made it clear that they do not support a permanent stationing of NATO forces in Eastern Europe,” believing it to be an “unnecessary escalation,” Robin Allers, a senior fellow at the Norwegian Institute for Defense Studies, writes on the NatoSource blog.

“Germany is still in a very pacifist mood.”

Recent history suggests the source of caution. Until 25 years ago, Germany was sliced in half and controlled in the east from Moscow. Since then, its leaders have been continental Europe’s point men for diplomacy with Russia. The World War II defeat also left a deep mark.

“Germany is still in a very pacifist mood. Everybody who’d ask for increasing substantially our defense budget would be seen as a warmonger,” says Clemens Wergin, the foreign editor for the center-right German newspaper Die Welt.

Merkel, who grew up in Soviet-controlled East Germany, has assiduously maintained relations with Putin, even as he escalated his confrontation with Ukraine, and she’s cautious about economic sanctionsagainst Moscow. That left the U.S. to forge ahead until she finally backed tougher measureswhen Russia continued to escalate the fight after the Malaysian airliner was shot down.

But given the latest string of developments in Ukraine, Berlin may have to re-evaluate not just its relationship with Moscow, but also its comfort level with a bigger military role in NATO. The German government is taking small steps toward more military engagement. Last week it announced it would join other European countries insending arms to the Kurdish forcesfighting Islamist terrorist forces in Iraq. Even that move got blowback from the German public.

“There is one other big event that may trigger” Germany to get more aggressive, says Benitez, “and that is if there is an overt Russian invasion of Eastern Ukraine.”

If it did invade, pressure on NATO to respond would ramp up. But Germany’s response could determine what happens.