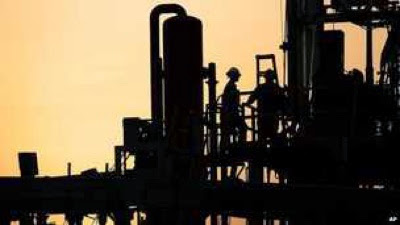 Concerns of oversupply after higher output in the US, together with forecasts of lower global demand by the International Energy Agency (IEA), are driving prices down.

US light crude dipped below $90 for the first time in 17 months.

In late London trading it was barely changed on the day at $90.63 a barrel.

On Wednesday, Saudi Arabia announced it was reducing its selling price for oil in a move to protect its market share, analysts said.

"This is a structural change in the oil market, with Saudi Arabia explicitly stating that they are willing to compete on price," said Bjarne Schieldrop, a commodities analyst at SEB.

The drop in price comes at a time when the Organization of Petroleum Exporting Countries (Opec) and the US are increasing output.

The extraction of shale oil in the US has increased the country's production of oil significantly - the IEA has forecast that the US will soon overtake Saudi Arabia and Russia to become the world's biggest oil producer.