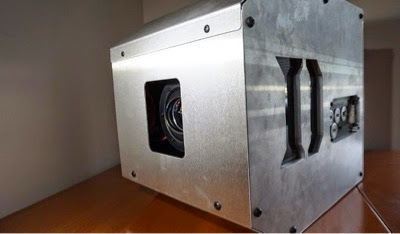 If you’re a doctor and want to take a picture of a patient’s skin to check for cancer, chances are you’ll run into a dilemma. You can either take a high-resolution picture of one specific area, or you can take a full-body shot at a low resolution. Or, if cost isn’t your greatest priority, you can do both.

But Duke University researchers think there’s a third option, which avoids the dilemma by upping the resolution and whole-body imaging power through 34 micro-cameras all working together. The new “gigapixel whole-body photographic camera” can render a patient’s entire body in-frame, or it can zoom in to the level of one suspicious-looking freckle. For telemedicine, this could mean more accurate diagnoses with a fraction of the expenses.

Daniel Marks, one of the co-authors on the paper and associate professor in the Department of Electrical and Chemical Engineering, says traditional methods are imperfect mainly because they demand a compromise between high- and low-resolution benefits. The new camera, however, “is designed to find lesions potentially indicating skin cancers on patients at an earlier stage than current skin examination techniques,” Marks said in a statement.

Selection of a 250 megapixel snapshot of a volunteer with one area shown in detail. Credit: Frontiers in Optics.

Most often, dermatologists turn to a procedure known as dermatoscopy. It uses the combination of light and magnification to scan patients’ skin for lesions and signs of melanoma, currently the most common form of skin cancer. Compared with naked eye examinations, dermatoscopy is actually pretty good. A 2008 study found it increased sensitivity (the ability to find dangerous lesions) by up to 20 percent and specificity (the ability to avoid false-positives) by up to 10 percent.

For all dermatoscopy’s upsides, however, the procedure is still inefficient. If a doctor wants to inspect a patient’s entire body, she’s forced to do so manually, rather than in one fell, digital swoop, which she can refer back to later. The new gigapixel camera avoids this problem. Each micro-camera focuses its shot according to its location among the others, with a specialist manning the computer to tweak individual cameras when necessary.

Marks concedes the invention doesn’t offer as great a resolution as the leading dermatoscope. But what it lacks in firepower, he says, it makes up for in sheer range. A pre-clinical test on one volunteer showed a whole-body image was just as readable as a 1-inch square section zoomed in. It’s this versatility that could mean the difference between detection and oversight.

According to the Centers for Disease Control and Prevention, just fewer than 71,000 men and 42,000 women were diagnosed with melanomas of the skin in 2011. Just over 12,000 people, roughly 8,000 of them men, died from melanomas. Experts suspect men face a greater risk due to a combination of factors, including manual labor rates and a reluctance to wear sunscreen.

Marks and his colleagues want to take the camera to clinical trials. If they can uphold the results of their initial proof-of-concept test, they’ll move one step closer toward federal approval, which means doctors can bring the camera into their own clinics. The team will present its findings at the Optical Society's 98th Annual Meeting, Frontiers in Optics. The event takes place Oct. 19 to 23 in Tucson, Ariz.