While the world sits in utter shock and disbelief by the savage rampage of the self-proclaimed Islamic State, elected heads of council and religious leaders practice institutionalized policies that inscrutably garner extremist ideology. In the month of August alone, Saudi Arabia — the biggest American ally in the Middle East—beheaded 19 individuals. While the Saudis are busy decapitating people, America’s closest ally, Israel, has religious leaders and heads of council fueling intolerance, such as Dov Lior—a leading West Bank rabbi who endorsed a book justifying the killing of non-Jews, and issued a religious ruling saying that Jewish law permits the destruction of Gaza—and calling for ethnic cleansing and genocide against indigenous Palestinian inhabitants.

Rabbi Dov Lior speaks at a rally attended by hundreds of orthodox Jews, outside the Supreme Court in Jerusalem. 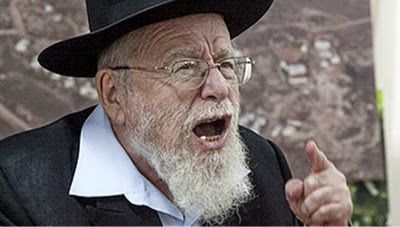 Israeli Rabbi Dov Lior, heads the Council of Rabbis of Judea and Samaria, serves as the Chief Rabbi of Hebron and Kiryat Arba in the southern West Bank and is the rosh yeshiva Kiryat Arba Hesder Yeshiva. Lior is a popular hardliner known for his extremist ideology. He recently reasserted that Israel should strive to “cleanse” the occupied territories of all Arab inhabitants. The Rabbi even called President Barak Obama a “Kushi,” which is Israel’s equivalent to nig*er. Lior perpetuates a Jewish extremist ideology, which is principally equivocal to that of the Islamic State.

In a speaking engagement held in Givat Oz V’Gaon last Tuesday, Dov Lior stated with conviction, there would never be peace, or a peace agreement made with the Palestinians because they only want to destroy Israel.

“There was no peace and there will never be peace, not because we do not want [peace], but because there is no one to make peace with,” said Lior.

Instead of advocating civil practices to transcend the barriers fueling intolerance, he stereotyped all Palestinians as one-dimensional warmongers who are inherently evil.

“This is their character, they are for war, and the traits of a nation do not change,” said Lior.

He even outright suggested that Israel “encourage” the Palestinians to leave the land—much like he advocated “cleansing” Israel of Africans.

“We must strive to clean the entire country,” Lior said, referring to the Palestinians.

Rabbi Dov Lior has a long record of incitement to commit terrorism and has been linked to convicted terrorists. Lior has legitimized by a halakha rulingand described the terms in which the killing of non-Jews is acceptable. He reasserted his Jewish supremacy ideology when he stated that Jewish women should not use sperm donated by non-Jewish men because the offspring of non-Jewish sperm will produce “negative genetic traits that characterize non-Jews” and that inferior “Gentile sperm leads to barbaric offspring.”

Testimonies from leading Rabbisconfirm that Lior’s incitement and labeling of Prime Minister Yitzak Rabin as a “rodef” and “moser”—a traitor who endangers Jews—was directly linked to Rabin’s assassination. If incitement and testimonies are not enough to convince a jury of Lior’s involvement in the murder of the Israeli Prime Minister, the well-known fact that Rabin’s assassin visited Lior before the assassination leaves no doubt.

It gets worse. The American born Jewish terrorist Baruch Goldstein—who massacred 29 Palestinian worshipers at the Cave of the Patriarchs—also met with Rabbi Dov Lior before he massacred innocent Muslims while praying. Even after the massacre, Lior described Goldstein as “holier than all the martyrs of the Holocaust.”

Convicted murderer Menachem Livni, headed a terror organization dubbed the “Jewish underground.” He testified that the spirit behind the underground was Lior–and not just for his preaching and religious rulings regarding the need to murder Arabs or killing “innocent people.” Lior, according to the testimony of the murderer, was involved in the details and decided how and when they would act. Lior pressured the hesitant perpetrators to blow up six buses with all their passengers. The buses were loaded with explosives with the object of killing hundreds. Only the delay enabled the Shin Bet security service to arrest them at the last minute.

In 2011, Lior was arrested after he refused to appear for court summoned questioning in regards to his endorsement of the religious book “Torat Hamelech,” which contains Jewish religious laws on the relations between Jews and non-Jews and contains racist invective and incitement to violence. In July 2014, Lior stated that it was acceptable to kill Palestinian civilians and destroy Gaza.

Rabbi Dov Lior’s Jewish supremacist ideology is as extreme as ISIS ideology. Both groups exploit religion to lay out conditions under which genocide is permissible against non-followers of their respective faiths. Perhaps it would be more fitting to reference followers of ISIS and Dov Lior as sociopaths. Extremist ideologies that use religious text to justify ethnic cleansing and genocide are ideologies that humanity can’t trust.

Perhaps Americans, along with the rest of the civilized world, have been deceived by the hypocritical justification for military intervention in Iraq and Syria against ISIS. If radicalism and extremist ideologies that perpetuate impermissible barbarism in the 21st century are a serious threat to civilized humanity; why is America wearing blinders when it comes to Saudi Arabia and Israel? Groups become the target of prejudice, discrimination, persecution and violence when extremist ideologies flourish uninterrupted. The general concepts of stereotypes, scapegoats, prejudices, and discrimination must be widely understood in a manner which will enable responsible global citizens to condemn behaviors inappropriate in a modern, pluralistic society.

Just because mainstream news coverage intentionally neglects these principally equivocal pro-genocidal extremist campaigns, does not dismiss the existential threat they pose against humanity.