Powered by Blogger.
Home » Marriage » Perkahwinan » According to Islam: Will Marriage Solve My Problems?

According to Islam: Will Marriage Solve My Problems? 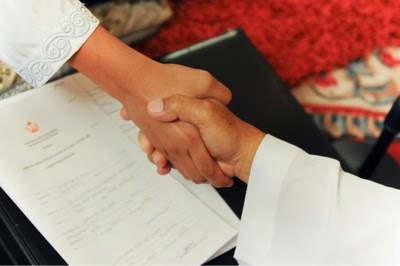 After engaging more with the Muslim community through activities like da`wah (calling to Islam), conferences, and halaqat (study circles), I have observed something intriguing: there seems to be a fascination—even obsession—with the topic of marriage. Regardless of whether a particular lecture is dedicated to something other than gender relations, the topic of marriage somehow always creeps up.
Now, do I consider this a bad thing? Not necessarily. Indeed, considering the magnitude of fitan (trials) that many unmarried folks face, such as the pressure to date or deal with the opposite gender on terms outside of the boundaries of Islam, I believe that marriage is something that should be discussed and encouraged.
What I’m more fascinated with, however, are the underlying reasons for why people –  especially the youth – want to get married so quickly. Despite not having enough resources to care for themselves, let alone a spouse, or whether they understand the Islamic obligations and duties of a spouse, it seems that many of our brothers and sisters have become consumed with the thought of marriage…why? I wonder: what are the psychological reasons behind why a person—who might not be physically or emotionally prepared—wants to get married? If this sounds like you—have you asked yourself why? I mean, apart from the obvious reasons of wanting to complete “half your deen,” or pleasing Allah subhanahu wa ta`ala (exalted is He), do you think there are some underlying issues that may be driving you to consider marriage?
Here are some reasons that I have come up with on my own:
I have noticed that some people view marriage as an escape from their current situations. Perhaps they believe that by getting married, all of their social and familial problems will be solved.
Unfortunately, some Muslims may be living under dire conditions at home and might be going through emotional and/or physical abuse, and so for them marriage seems like a way out.
Some people may feel misunderstood by their peers and families, and may desire a partner who can understand and sympathize with them.
Some individuals may be feeling pressure from their relatives or cultural/ethnic communities. They may be made to feel bad for not finding a spouse, or even ridiculed and ostracized for being single.
A lot of people seem to be what I’d like to call “baby-obsessed”: for them, marriage is about having child, after child, after child, after…you get the point.
For some, being in a relationship is about status: literally going from “single” to “taken” or “married.” It is about letting the world know that “Yes, I am important,” and the fact that they have a partner is a sign of that importance.
What about those who feel left out? Some may find that all of their friends or peers are getting married, and yet there they are, all alone. They may internalize their “single-hood” and begin to think that something is wrong with them.
My point is, issues such as low self-esteem, lack of attention, the desire for appreciation, the need to be noticed, lack of emotional support, peer/familial pressures, and societal expectations are, unfortunately, some of the underlying reasons people may seek marriage. We have been made to believe that marriage will solve all of our problems; that after getting married, we will truly live happily ever after. In my opinion, this outlook turns marriage into an end instead of a means and as a result, marriage becomes the “end all, be all” for many of us, We tell ourselves things like: “after marriage, I’ll be happy,” “after I get married, I’ll be satisfied.” We begin to view marriage as the ultimate solution to all of our problems, when in reality it is not. Marriage must be viewed as a means, and understood in terms of your personal relationship with Allah (swt). It is not marriage, in and of itself, that will bring you things such as happiness or contentment. Rather, it is through the act of marriage that you will find yourself coming closer to Allah (swt) insha’Allah (God willing).
Through coming closer to Him and turning back to Him, you will begin to find true happiness and contentment, insha’Allah (God willing). That said, marriage should be viewd as a means to draw you closer to Allah (swt); a means of attaining His pleasure and earning His Paradise.
Brothers and sisters, marriage won’t solve your problems—Allah (swt) will.
So, if you find yourself currently in a rut—everything seems to be going “bad” for you; you’re depressed, lonely, sad, angry, frustrated, confused, or hurt—take a step towards Allah (swt). Turn to Him to solve your problems. Who knows, marriage may be the means through which He decides to help you…yet at the same time, it may not be. The point is, we need to start viewing the idea of marriage with a healthy mind-set: one that is enriched with knowledge and empowerment from the Qur’an and Sunnah and one that realizes that Allah (swt) alone is the solver of all our problems and issues—and Allah (swt) knows best.
Original source: suhaibwebb.com
Marriage Perkahwinan
Share this article :
Tweet
+
Next
« Prev Post
Previous
Next Post »