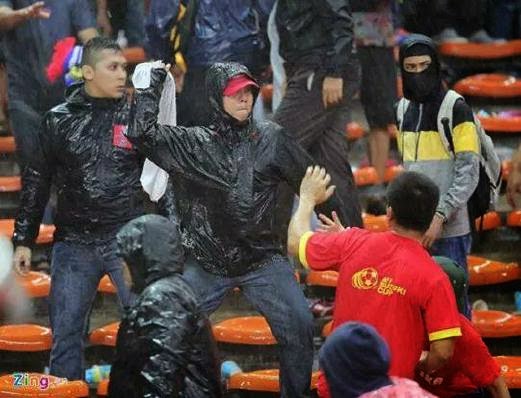 Various media reported that supporters from both sides were involved in violent clashes that were halted by authorities.

We would like to apologized to Vietnamese football fans over the actions of a group of Malaysian thugs (Football Hooligans) who attacked them during the closing stages of the AFF Suzuki Cup first-leg semi-final tie in Shah Alam on Sunday.

There is no excuse for such violent behaviour. More so as they are our guests. Is this the way we treat guests? It doesn’t matter if they are here on holiday or are working here, this is not a Malaysian culture.

Those responsible should be aware that the Malaysian fans could be on the receiving end of hostilities in the second leg in Hanoi, Vietnam.

Isn’t this provocation and poses a security risk to Malaysian fans in Hanoi?

Because these thugs (known as Inter Johor Firms) will not apologise and there will be no response from FAM yet, We would like to apologize to the Vietnamese fans who were attacked. Hope police can investigate the matter and send them (IJF) in Jail.

These violent fans do not represent Malaysia. Our sincere apologies on behalf of Malaysia for the actions of these small number of irresponsible thugs (IJF Hooligans).