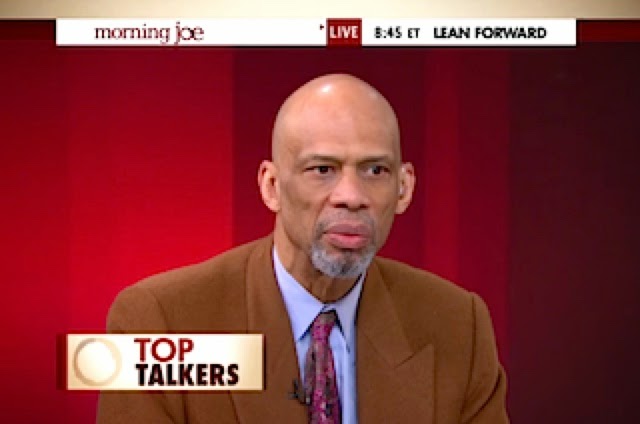 Former NBA star Kareem Abdul-Jabbar stopped by Morning Joe on Monday, presumably to promote his new children’s book, Stealing the Game, but the hosts also asked him to discuss a recent column he wrote for Time about the role that Islam does or does not play in terror attacks like the one against Charlie Hebdo.
“Another horrendous act of terrorism has taken place and people like myself who are on media speed-dial under ‘Celebrity Muslims’ are thrust in the spotlight to angrily condemn, disavow, and explain—again—how these barbaric acts are in no way related to Islam,” Abdul-Jabbar, who converted to Islam in the late 1960s, wrote last month.
Asked by Mika Brzezinski to explain what he believes is behind the actions of a group like ISIS, he said, “It’s a play for money and power, and these people try to impose their will on people so people will listen to them, and they can be in charge. That’s all it’s about. They’ve taken on a fascist attitude and a fascist approach to everything. You do what we say or you die.”
“You can make parallels to things that have happened here in America. Like the Ku Klux Klan saying they are the Christian knights,” Abdul-Jabbar added later. “And they do not practice Christianity.”
Like President Barack Obama, who drew parallels between what we are seeing with Muslim extremism today and what the world saw during the Christian Crusades, Abdul-Jabbar went on to reference those centuries-old events to make the point that people have always used religion “as an excuse” to commit horrendous violence.
“It’s not an excuse, it’s no excuse and oppressing one group means that we have to look out, all groups have to get together to fight that type of oppression, because we all should be free,” he said.
World News
Share this article :
Tweet
+
Next
« Prev Post