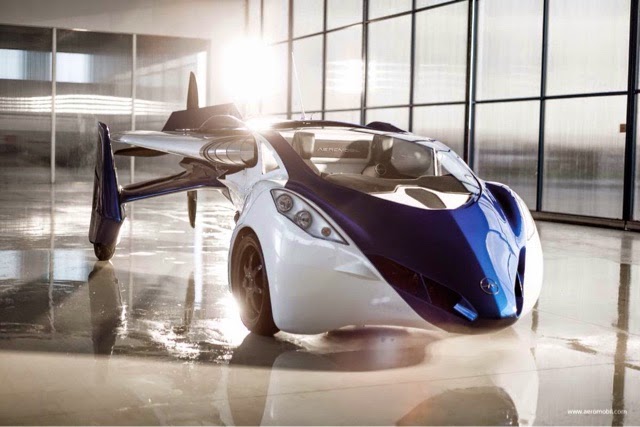 In October 2014, Slovakian company AeroMobil unveiled a prototype vehicle that exhilarated Back To The Future fans, as well as pretty much everyone else: the long fantasized flying car. Dubbed AeroMobil 3.0, the car/plane hybrid showed off its driving and flying abilities in a video filmed at the 2014 Pioneers Festival in Vienna. With its wings tucked in, the carbon fiber vehicle drives the streets seamlessly with other cars. Then, it makes its way to a parking lot, unfolds its wings, and takes off from a grass runway. It soars leisurely over the buildings of Vienna, before touching down in a green field.
At the time, the video was just a demonstration of what AeroMobil had accomplished. Now, the company is detailing their vision for the prototype’s future. At South By Southwest 2015, Juraj Vaculik, co-founder and CEO of AeroMobil, spoke at a panel about the future of flying cars, predicting a world ahead in which these vehicles easily merge with existing transportation. For him and his team, the goal is to make medium-distance travel much less of a hassle, and to do so, the company aims to put its vehicle on the market by 2017.
An AeroMobil representative told Popular Science the price would be several hundreds of thousands of dollars, which they argue is on par with a combination of a sport aircraft and a supercar.
But the announcements didn’t stop there. Vaculik also highlighted the company’s next revolutionary venture in this field: the self-flying car. AeroMobile says now that they have shown that flying cars are possible, it’s time to make them drive—and soar—on their own. 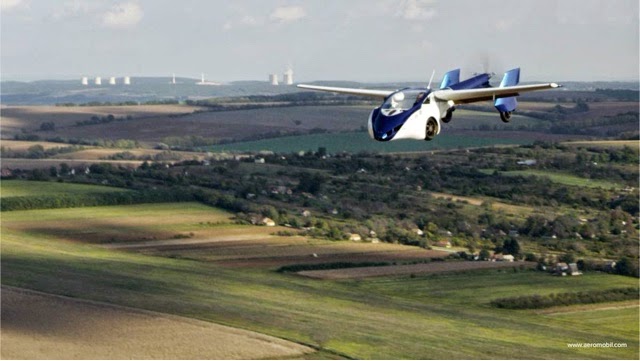 The Roadster's First Flight
Despite its unique look, AeroMobile 3.0, also named the Flying Roadster, isn't all that different from your average sports car or private plane. It runs on regular gasoline and can seat two people. When driving, it boasts a range of 545 miles and a top speed of 99 mph. When airborne, it can reach a top speed of 124 mph, with a range of 435 miles.
Notably, the Roadster—as well as all subsequent vehicles AeroMobile plans to build—can take off from and land on any flat grass field. This element is crucial for the vehicle’s success, claims Vaculik. He argues that it makes the building of additional airports unnecessary, and that instead, flying cars can launch off and land on grass lanes that could merge onto to existing highways. The Roadster only needs 650 feet to take off and just 160 feet to land, so the amount of land required for each runway wouldn’t be too substantial. 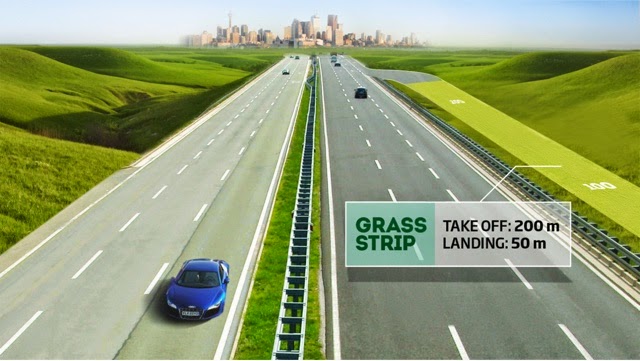 AeroMobil still has a few things to hammer out before the Roadster can go mainstream, such as securing enough funding for mass production, as well as solidifying regulations and certifications from the European Union. And while most people may want their very own Roadster when it debuts, AeroMobil’s main goal isn’t to replace every single car with a flying one. Vaculik noted that initially, the Roadster is targeted to wealthy buyers and flight enthusiasts.
The company's long-term goal is to cut down on inefficiency. The idea is to provide options for people traveling what AeroMobli considers “medium” distances, or trips at around 400 miles. If someone decides to fly such a distance now, the process of traveling to and from the airport, in addition to the actual time for air travel, adds up to around six hours. But if a person were to simply take off near the starting location and then land close to the trip’s destination, it could cut down travel time to just 3.2 hours.
If the Roadster can accomplish this and generate enough profits, then AeroMobil will pursue their idea for the self-flying car. Vaculik didn’t give any indication as to whether such a vehicle is already being built, but he noted that it would incorporate already existing autonomous driving and flying technologies, and it would boast advanced vehicle-to-vehicle communications systems. Plus, it would be a tad more accommodating, seating four rather than two.
For that, we'll just have to wait until 2017 to see how well the Roadster's debut goes.
Technology
Share this article :
Tweet
+
Next
« Prev Post
Previous
Next Post »