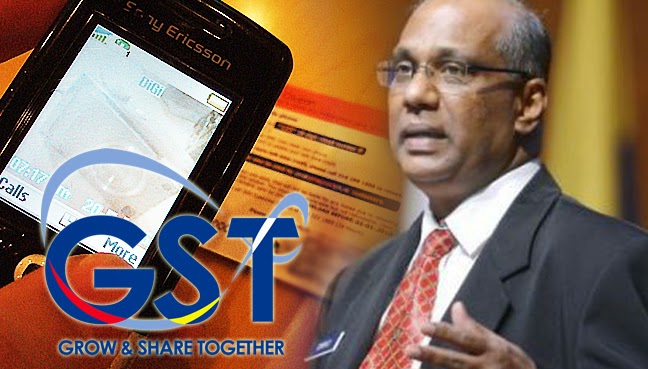 PUTRAJAYA: The Customs Department and telco companies are working to resolve the issue of Goods and Services Tax (GST) charged to top up prepaid phone cards, so as not to burden the rakyat.

An interim compromise was reached following a meeting yesterday, where the telecommunication companies will be allowed to charge the 6% GST for a period of three months, provided subscribers are given more airtime and texting quota.

After three months, the department will negotiate with the telcos for a permanent solution.

Customs GST division director Datuk Subromaniam Tholasy said yesterday that this was the culmination of discussions held between the Domestic Trade, Cooperatives and Consumerism Ministry, Customs and all telcos, after it received numerous complaints on the matter on April 1.
Telco issues topped the statistics for GST complaints yesterday, at 44%.

Subromaniam said telcos were given two choices during the discussions.

“The choices were either they fix the price as it was earlier or increase the airtime and SMS.

“This is actually good news for subscribers. Let’s say the prepaid card costs RM10, then subscribers have to pay 60 sen GST but they get an additional RM1 worth of free air time and SMS,” he added.

Meanwhile, sources told media that if the telcos were allowed to impose the 6% GST, they would be reaping millions in additional revenue, as this was absorbed by them as a cost under the Sales and Services Tax (SST) regime.

Prior to the announcement by Customs, analysts were projecting a 3% increase in prepaid revenue for telcos from passing on GST to prepaid customers.

Maybank IB Research analyst Tan Chi Wei emphasised that the benefits of GST are not as clear-cut as simply a direct flow-through of the previously foregone revenue down to earnings before interest tax, depreciation and amortisation.

“There are elasticity considerations, and competition remains intense, meaning part of the newfound revenue could be returned back to customers in the form of lower effective tariffs. It remains to be seen how price points would eventually trend in the coming months,” he explained.

A cursory check of Maxis’ 2014 annual report showed that prepaid revenue (permutated from number of prepaid subscribers and average revenue per user) for the year 2014 stood at RM327.21 million.

A 3% increase would mean an almost RM20 million increase in revenue for the group from the act of passing on the tax to customers.

As telcos have been absorbing the 6% service tax previously charged, the move will see telcos register new-found revenue which was previously tied up.

An industry observer opined that with the prepaid sector accounting for about 60% of total revenue for the industry, which comes up to about RM25 billion, this means that the telcos have been absorbing close to RM1 billion in the form of taxes under SST, yet they still managed to record a few billion in profits.

Under the current practice, telcos are not issuing tax invoices for the GST they charge although these are required by law for claims of input tax.
News
Share this article :
Tweet
+
Next
« Prev Post
Previous
Next Post »