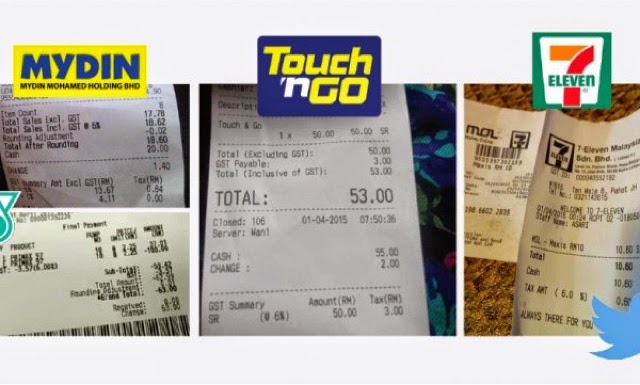 Consumers have taken to Twitter to vent their frustration over the Goods and Services Tax (GST) that kicked in today with allegations that they should not have been taxed for some products.

It seemed that both consumers and traders are still confused over what products can be charged GST and what do not fall under the tax.

Many pictures of receipts have been uploaded and tagged to government officials and ministers as well as Prime Minister Datuk Seri Najib Razak.

@wilayah_news tweeted: “Beware of receipts that do not show their GST id as they are not valid charges”.

Earlier in the day, there were also many receipts of mobile top ups in 7-Eleven outlets that showed GST charges despite reports that mobile top ups are not subjected to the tax.

However, reported by most of the netizen in social media; found no GST charge in the 7-Eleven outlet mobile prepaid upload receipt.

It is unclear if they had rectified it or if GST was charged in selected outlets only, and attempts to call the company for comments were unsuccessful.

Captured by Social Media also showed that reloading mobile phone prepaid credit from Maybank2u was subject to the 6% tax although it not supposed to be taxed.

There were also uploads of receipts which showed GST was charged for newspapers and Touch ‘n Go reloads which were part of the list of GST-free products.

In another interesting twist, Mydin Mohamed Holdings Bhd, who were reported just a day ago saying it would absorb the GST at the cost of RM15 million from the estimated RM300 million monthly profits of its hypermarket and supermarket, seemed to have forgotten its promise.

Many receipts from its stores showed 6% GST charges, despite the promise by its managing director Datuk Ameer Ali Mydin who said Mydin would recover a portion of the GST cost from its suppliers and from the stocks that are refundable under the existing Sales and Service Tax (SST), and absorb the rest.

Efforts to contact them for comment were unsuccessful. However, in a call to the Mydin customer service line, The Rakyat Post was told the receipts stating the 6% GST was actually a formality to fulfil the requirements of Customs.

The customer service representative said the company did not charge GST on buyers and it was all absorbed by Mydin.