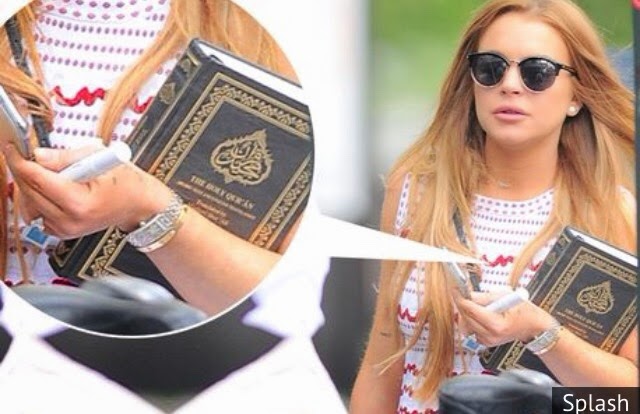 The star looked carefree wearing a casual red and white summer dress and dark sunglasses as she was seen in making her way out of the children's day centre in Brooklyn.
Lindsay, who held the Quran under her arm, also recently revealed she was giving up alcohol and dating.
Media claimed that Lindsay was a couple of hours later than expected, over an hour after the children started to arrive for the day. 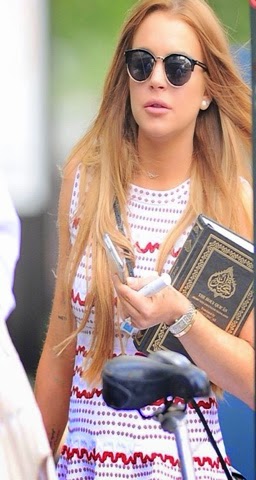 Lindsay's day at the daycare centre comes after she failed to turn up on her first day, with her absence being put down to paperwork issues.
The actress was due to arrive for duty at the Duffield Children's Centre in Brooklyn, New York, on Tuesday morning, according to the New York Daily News.
Speaking outside the centre on Tuesday, a member of staff told reporters: "She will be doing her community service with us, she will not be here today.
Ivonne Lopez, the facility's director of early childhood programmes, continued: "There are some things that need to be managed before she can start her community service."
She added: "She needs to be cleared."
Rep for Lindsay confirmed a few procedures needed to take place before she could attend, including medical clearance, which has now been sorted.
The 28-year-old star caused some confusion when she took to her Instagram account on Monday to say she was in NYC and "ready to help", but reportedly didn't fly in from London until late afternoon.
Lindsay wrote: "Happy to be home in nyc with my family and friends. Missed this place. ready to help."
Lindsay must complete 115 hours of community service before May 28 or face jail time after falling "woefully short" of her 125 hours.
The 28-year-old star was ordered to do more hours in February after a Los Angeles judge criticised certain tasks she had counted as part of her punishment for reckless driving in 2012, including meet-and-greet sessions with fans in London.
Last week Lindsay was said to have undertaken 9.5 hours and will therefore have to work seven hours a day for seven days a week in order to finish by the deadline.
Share this article :
Tweet
+
Next
« Prev Post