The Android Software Development Kit (SDK) is actually a collection of tools that will help you make Android apps. There's more outside the SDK that we'll discuss, but here are some of the most helpful tools in the SDK: 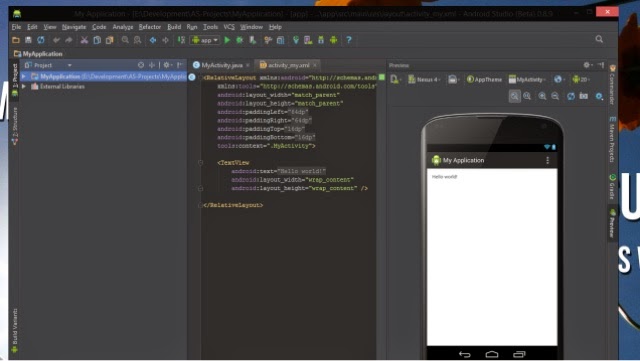 There are two primary integrated development environments (IDE) for Android. An IDE is the main program where you'll write code and put your app together. It can help you organize and edit the various files in your app, manage the packages and supporting libraries you app will need, and test it out on real devices or emulators.

The default IDE for Android is Eclipse. Eclipse allows you to modify Java and XML files and organize the various pieces of your application, among many other tasks. The version you get from Google also includes a package manager that allows you to update to the latest version of Android tools as soon as Google releases them.

The main alternative is Android Studio, which is currently being made directly by Google. Like many Google projects, Android Studio is part of a prolonged beta. The long-term intention is for Android Studio to replace Eclipse as the primary IDE for Android development. That doesn't necessarily mean it's for everyone. For example, if you need to make use of the Native Development Kit for apps like games (hint: if you need it, you probably already know you need it), Eclipse is mandatory. However, Android Studio is a good option if you want to get a jump start on the future, and you're willing to tolerate some possible bugs.

No matter which IDE you choose, using it is a bit like Photoshop: it can do a ton of cool things, but you'll probably only learn the individual tools as you need them. However, this is also a good place to get started on some of the basics of Android development. Here are some great tutorials and resources to get you started:

Udacity - Developing Android Apps: This 8-week online class has a good amount of free elements, taught directly by Google engineers. The course won't just copy-paste code, but it will help you learn some of the core concepts and features you'll need.

Android Developer Training: Part of Google's documentation includes training tutorials on how to use its tools. These documents will walk you through basic features of the IDE. If you don't have much experience developing applications, this might not turn you into a master dev, but it will help you learn the tools.

Vogella: It's worth mentioning Vogella tutorials in just about every section here. This massive set of tutorials covers just about everything you could cover. If you have a basic question not covered above, check Vogella.