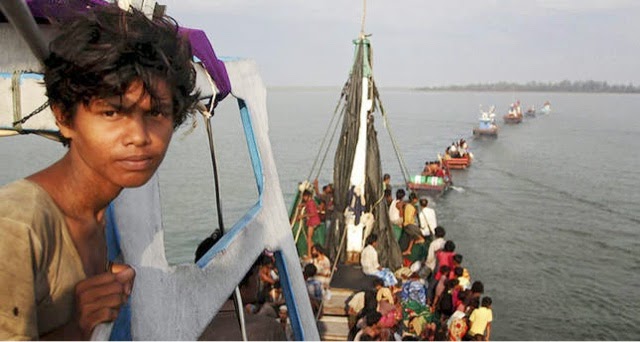 Prime Minister Ahmet Davutoğlu announced on Tuesday that a Turkish Navy ship was dispatched to the coast off Thailand and Malaysia where thousands of Rohingya Muslims are stranded at sea. He said that Turkey was exerting efforts to reach out to the people aboard with a Navy vessel and in coordination with the International Organization for Migration.
Davutoğlu made the comments in Ankara during his meeting with the youngsters from the country's 81 provinces on 19 May Youth and Sports Day -- a national holiday focusing on the country's youth with sports and cultural activities.
The prime minister said, "There are such youngsters who get on the boat from Myanmar to go to Thailand among six thousand people," adding that these youths do not have a 19 May to celebrate.
"They do not have plans to schedule even for tomorrow," Prime Minister Davutoğlu said.
An estimated 4,000 of Myanmar's Rohingya Muslims, as well as other migrants from Bangladesh, are stranded with little access to food or water after Malaysia, Indonesia and Thailand announced they would not allow migrant boats to land on their shores.
On Wednesday, however, Malaysia and Indonesia reached an agreement and said they would no longer turn away boatpeople, a breakthrough in the region's migrant crisis that came just hours after hundreds more starving people were rescued at sea.
The Malaysian and Indonesian foreign ministers made the announcement after talks - also attended by Thailand - over how to deal with the stranded migrants, mostly from the persecuted Rohingya minority in Myanmar.
"Indonesia and Malaysia agreed to continue to provide humanitarian assistance to those 7,000 irregular migrants still at sea," Malaysian Foreign Minister Anifah Aman said alongside his Indonesian counterpart Retno Marsude.
"We also agreed to offer them temporary shelter provided that the resettlement and repatriation process will be done in one year by the international community," he added after the meeting near Kuala Lumpur.
The Myanmar government Wednesday banned a conference of the nation's Muslims because it said the meeting risked "destabilizing" Myanmar, the Irrawaddy news website reported Wednesday.
The Union Muslims Nationwide Conference was planned for May 23, but Ohn Maung, the group's secretary, said the government had already denied them permission to hold the meeting late last year.
A rising wave of Buddhist nationalism has been blamed for the outbreak of mob violence that has largely targeted Myanmar's Muslims.
The Rohingya, a largely stateless group living mainly in Rakhine state along the Bay of Bengal, have borne the brunt of the violence.
Large numbers live under apartheid-like conditions in squalid, disease-ridden camps, and the group has faced systematic discrimination for decades, including restrictions on giving birth, marrying and moving around the country.
The United Nations estimates that 120,000 have left the country by boat in the last three years, fleeing increasingly desperate conditions and the threat of arbitrary violence by local Rakhine Buddhists and security forces.
World News
Share this article :
Tweet
+
Next
« Prev Post