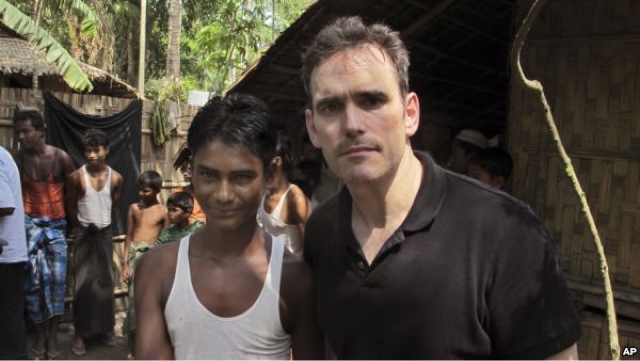 American actor Matt Dillon, right, with Noor Alam, a 17-year old Rohingya survivor of human-trafficking at Thetkabyin village, north of Sittwe in the western state of Rakhine, Myanmar, May 29, 2015.

American actor Matt Dillon put a rare star-powered spotlight on Myanmar's long-persecuted Rohingya Muslims, visiting a hot, squalid camp for tens of thousands displaced by violence and a port that has been one of the main launching pads for their exodus by sea.

It was “heartbreaking,” he said after meeting a young man with a raw, open leg wound from a road accident and no means to treat it.

Mothers carrying babies with clear signs of malnutrition stood listlessly outside row after row of identical bamboo huts, toddlers playing nearby in the chalky white dust.

“No one should have to live like this, people are really suffering,” said Dillon, one of the first celebrities to get a first-hand look at what life is like for Rohingya in the western state of Rakhine. “They are being strangled slowly, they have no hope for the future and nowhere to go.”

Though Rohingya have been victims of state-sponsored discrimination for decades, conditions started deteriorating three years ago after the predominantly Buddhist country of 50 million began its bumpy transition from a half-century of dictatorship to democracy.

Taking advantage of newfound freedoms of expression, radical monks started fanning deep-seated societal hatred for the religious minority. Hundreds have been killed by machete-wielding mobs and a quarter million others now live under apartheid-like conditions in camps or have fled by boat -hundreds of dehydrated, hungry Rohingya washing onto Southeast Asian shores in recent weeks.

Denied citizenship, they are effectively stateless with almost no basic rights. As they become increasingly marginalized, several groups are warning that the building blocks of genocide are in place.

“I know that's a very touchy word to use,” said Dillon, wearing his trademark black T-shirt and jeans. “But there's a very ominous feeling here.”

“I've been to some places where the threats of violence seemed more imminent,” said Dillon, who has also visited refugee camps in Sudan, the Congo and elsewhere. “Here it's something else. It feels more like people are going to be left to wither away and die.”

Dillon said he decided to come to Myanmar following a desperate, urgent appeal by Rohingya activist Thun Khin at a Refugees International fundraiser in Washington, D.C., just over a month ago. In Japan to promote his new television series, “Wayward Pines,” he decided it was a good time to make the trip.

“There are people working here, people who know a hell of a lot more about it than I do,” Dillon said after hearing grumbling from some aid workers about what he hoped to achieve. “But listen, if I can use my voice to draw attention to something, where I see people suffering, I'll do that any day of the week. I'm happy to do that.”

He spoke to two teenage boys who tried to flee by boat, only to find themselves in the hands of human traffickers, and was chased away by armed security guards when trying to snap pictures of the last standing Rohingya neighborhood in the state capital - a ghetto surrounded by tall walls topped by rolls of heavy barbed wire.

But what really choked him up were the camps: “It affected me more than I thought it would.”

While there were clear signs humanitarian agencies are active - new latrines, well-placed hand pumps, concrete open sewers - he noted in contrast to camps he's visited in Sudan and the Congo, he didn't run into a single Western aid worker during his two-day visit.

Nor were NGO trucks rumbling through with medical equipment, food or other supplies - due primarily to severe restrictions placed on aid agencies by the government following pressure from Buddhist extremists.

“A lot of people are suffering,” he said. “I'm really glad I had a chance to come, to see for myself what's happening here.”