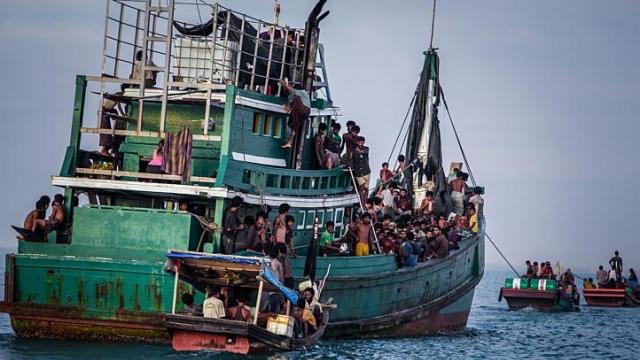 Outwardly, they are exemplary businessmen involved in import and export but beneath the facade, they have been found to be the top three Malaysian kingpins of an international human trafficking ring.
An elite police team from Bukit Aman headquarters investigating the human trafficking of Rohingya and Bangladeshis at the Malaysian-Thai border has identified the key suspects after the arrests of more than 70 of their runners.
It is learnt that the team, comprising members of the Special Task Force On Organised Crime (Stafoc), Special Tactical Intelligence Narcotics Group (Sting) and the Special Branch is coordinated directly by Bukit Aman.
Members of the team are closely monitoring the suspects, who are based in Penang, Perlis and Kedah and are also going through their banking transactions.
Kedah police chief Senior Deputy Comm Datuk Zamri Yahya confirmed that the officers were also working with Interpol in tracing the Malaysian links to the human trafficking racket.
"It is just a matter of time before they are brought to justice," he said.
SDC Zamri said the team made a breakthrough in determining the leaders of the syndicate after gathering intelligence which led to the arrest of more than 70 of their runners, under a special operation called Ops Pintas Utara over the past month.
The runners comprised Malaysians, Bangladeshis and also Rohingyas holding UNHCR refugee cards, who were found to be "trusted lieutenants" of the kingpins.
News
Share this article :
Tweet
+
Next
« Prev Post
Previous
Next Post »