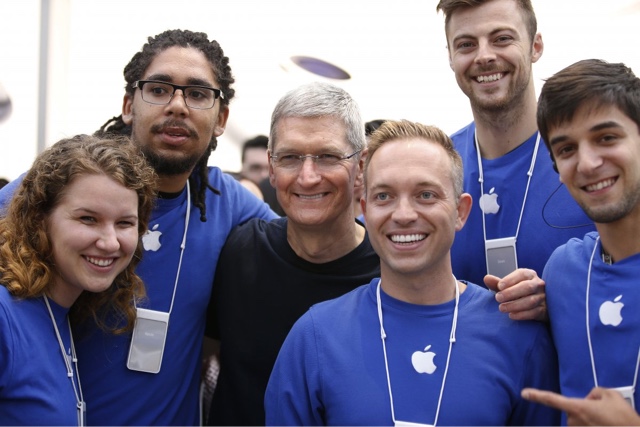 Imagine this: You’ve just landed your dream job, but you can’t tell any of your friends about it, post about it to your Facebook page, or list details about your accomplishments on your resume.

This is what it’s like to intern at Apple.

“They want to be able to release a product that everyone’s happy about but no one knew about before,” said a former Apple intern that requested to only be referred to as Brad. “You can’t tell anyone anything about your job,” he said. “You can’t tell people outside of your family what you’re working on.”

The strong emphasis on secrecy combined with an unusually loyal legion of employees makes the culture at Apple much different than that of most Silicon Valley companies. We chatted with Brad to learn more about his experience, and here’s what we found.

The interview process at Apple is much different than what you’d find at Google and Facebook, Brad says. Apple interviews intern candidates for specific roles, and the manager of that particular team would conduct the interview.

According to Brad, who has interviewed for an internship position at Facebook and has heard from friends who have interviewed at Google, those companies do things a little differently. Rather than interviewing an intern candidate for a specific job, Google and Facebook conduct more general interviews and then place them on specific teams once they’re hired.

Brad didn’t mention any specific interview questions he encountered at Apple, but said that he spent an hour or two talking about his previous job with the interviewer.

“It was kind of a really simple interview process,” he said.

And when he heard he got the job at Apple, he accepted the offer immediately.

“I was super happy,” he said. “I just told them on the spot that I was going to take the offer before I even saw the pay or anything.”

Interns make $38 per hour, according to Brad, which aligns with anonymous salary reviews posted on career site Glassdoor. This averages out to about $6,700 per month, Brad says.

Interns also get paid overtime if they work more than 40 hours per week, Brad says. And, anything over 40 hours counts as time and a half, while interns make double their normal hourly wage for working more than 60 hours in a week.

This gives interns a big opportunity to save up for the future — especially because they don’t have to pay for housing. According to Brad, Apple offers free housing in the Bay Area if you don’t mind living with another Apple intern.

In fact, this was one of the best parts of the Apple intern experience for Maxime Britto, a former Apple intern who worked on the Safari team back in 2008.

“The greatest thing with housing is that you are not alone,” Britto wrote. “You share it with three others interns from all around the world. It is a great way to learn and mix with other cultures.”

If you don’t want to bunk with other Apple interns, the company gives you $1,000 toward your monthly rent, says Brad. If you’re moving out to the Bay Area specifically to work for Apple, the company pays you around $3,300 to cover the cost of relocation costs such as airline tickets, shipping your belongings out to the Bay Area, etc.

“[They're] bringing people from all over the world, and they don’t want to make it a big pain to have to move there,” Brad said.

Apple tries to make it as easy as possible for people around the globe to work at Apple. Britto said that Apple assisted with his paperwork when he came to the United States from France.

He also noted that Apple employees were especially understanding that English wasn’t his first language.

“Whether it was at work or with the other interns outside of work, people have always been very patient and nice to me,” he wrote on Quora.

A culture of secrecy

Apple’s goal is to “surprise and delight,” says Brad, so it’s key to keep their projects as secretive as possible. Apple also ensures that employees from different departments don’t find out what each other are working on by blocking off access to certain buildings on campus.

“Everything is totally locked down,” Brad said. “There’s no taking pictures on campus; it’s super crazy.”

This is an idea they instill into interns and employees on day one in what Brad referred to as “secrecy training.” (As it turns out, that’s not just to prevent leaks. It’s actually a management technique).

Sometimes, Apple employees will work on a product without even knowing what it is. Brad said he spoke with an Apple employee who worked on the original iPad back in 2010. This person said he or she had been working on 9.7-inch displays for one or two years without knowing exactly what they were for.

“They didn’t know if it was a big phone or a small laptop,” Brad said. “They had no idea. It wasn’t until the product release where Steve Jobs went on stage and showed the iPad that they realized this is what we worked on for the past two years.”