Rawang: A restaurant so famous for its steamed tilapia (Fei Zhou Yue or African fish, anyone?), one has to endure the horrendous traffic at peak hours (a good half an hour from the toll exit in Rawang), brace the heat (the restaurant ain’t air-conditioned nor shielded from the sweltering heat fully, aside from the misty air blown from the many fans with vapours), and patience tested to the limit from the 15 minutes stand-by mode at the sidewalk waiting for a seat, AND roughly 20 minutes cooking time. Phew. 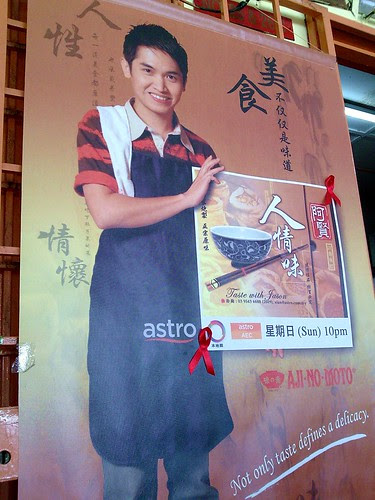 But when such simple and unassuming outlet has got the legendary boo_licious and so many others singing praises, you know it’s gotta be good!

Refrain from arriving during peak hours. The shop’s opened for lunch and dinner, but come public holidays/weekends, the queue for a table can be a rather …. unforgiving o rdeal. Fortunately, the staff are helpful, and thankfully remember who’s first, and who’s last, and who’s the impatient in-betweener who’s trying to sneak up and play dirty.
If you’re wondering, Lan Je refers to the lady owner who’s been manning this restaurant for a good many years. She does help out running the place, especially during peak times, when the place looks like helter-skelter, but instead rather systematic.

Ordering your food here is a breeze. No menus, no daily specials. Steamed Tilapia is a MUST, hence if you’re bringing one who doesn’t value his/her seafood, tough luck. Choose from mild, spicy, or extra spicy. Go for normal spicy, as you wouldn’t want the excessive ginger+chilli padi to burn your tongue and risk tasting none of those firm, sweet flesh. Most patrons order a fish each, to fully savour his/her own fish, without the need to fight over the best parts.
They do not serve pork, so for your other carnivorous needs, you have chicken cooked either Kung Pao style (with onions and dried chillies) or Sweet and Sour style.

Without much expectation, the Kung Pao Chicken was nearly mind-blowingly good. Really thick, sweet, spicy and glistening gravy coating the slightly fried cuts of chicken. The difference between Lan Je’s version and the average out there lies in the sauce definitely. With a lot of chopped garlic, for that special flavour. Minor gripe? The cuts of chicken should be deboned 100%, so that every bite is a bliss.

Not much choices when it comes to the greens, with many ordering their famed “4 Dim Dau”, or Four-Angle Beans fried with Dried Shrimps. Crunchy, tasty, and not spicy at all, the vege was pleasing to the palate, as well as the wallet. Hahaha ….

The meal was cheap, with dishes ranging from RM6-RM7 per plate, and the fish at about RM13 each. Another one of their specialty includes the deep-fried prawns, which we did not order that day, at RM19 per serving.

Directions : From Rawang toll exit, go straight until the traffic lights. Turn right and go straight along the long and winding road, which I believe is Jalan Batu Arang. You’ll pass over the railway beneath you, and KTM station on the left. Turn right at the traffic lights at the intersection, then go straight along Jalan Rawang, the main road. You’ll pass by the mosque on your left, and Maybank on your left further down the road. Lan Je is situated on your left, a single-storey shoplot tucked between some Malay shops and such.